Guess what?? It’s almost that time again! Fall has arrived (at least where most of my readers are) and it’s time for college football. I hope y’all are getting hyped for this season’s Aggie football team. I know I am. I found this great new podcast you should check out: Old Army FightCast. This last week’s podcast was with former Aggie DB Jordan Pugh and they got down to business with the real questions: Layne’s or Cane’s (Layne’s of course), favorite Bluebell flavor, and on both his time as a player and this season’s team. Listen in and tell me what you think or post your comments about how you think we’ll do this year 🙂

And then from the other side from Jordan Pugh’s YouTube page:

You may be getting tired of hearing about Wellington by now, but it’s only about 3 hours away and easy to get to. I went back this weekend. I don’t even need the GPS by now to get to the house I stay at and I’d say that’s an accomplishment because you know how much I hate driving in big cities.

Early morning drive again, about 6:30am after a FaceTime chat with my mom. Was subjected to saying hello to Bailey (the new puppy from last time). I love driving this early… no one on the road, and thank goodness for a fully charged iPod since the radio doesn’t really work well. Probably not the best weekend for a road trip because by the time I made Bulls for coffee, it was hailing. Luckily it lightened up a bit for the rest of the drive and my time in town.

Oh! I finally got to go to the other Gallipoli exhibit at the Dominion Musuem – The Great War Exhibit. There’s Anzac Square, National War Memorial, and then the museum behind it. WETA also worked on this one. I highly recommend booking a tour ($10) and having someone take you through. I was in the first tour with 2 older ladies from Auckland and our guide – Hayden – knew way more than the exhibit explained. It’s about an hour and the exhibit is very well done. The first section was made to look like a war time French village and it goes on from there. There’s some new additions so pay attention to the floor in certain areas. Also, you can smell at least 3 different types of gases that were used during the war.

Planes were now being used in war and a bus bought by the British Army to convoy soldiers.

Uniforms of the war and a trench replica.

The paint was meant to mess with aerial cameras. 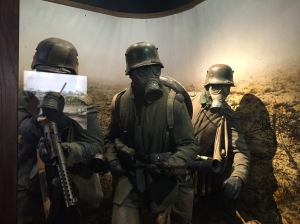 This last weekend in Wellington was also the Women’s Lifestyle Expo at the TSB Arena on the Queen’s Warf. Tons of great stalls and things to win. Cheap nails stations and hair stylists. I met with a friend that I met at Armageddon and we went to the expo after lunch. Somehow I ended up being talked into a new haircut. It looks so different that I hardly recognize myself. Glad I got it done because I had the theater that night. 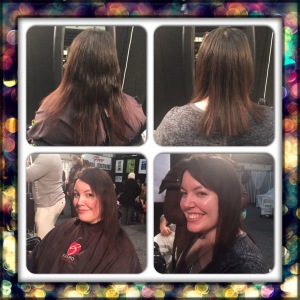 New haircut!! Shorter in the back and longer in the front. Have fringe again so good luck to me on fixing it every day. 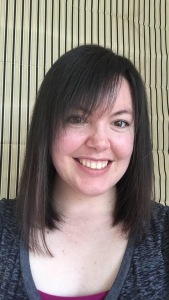 Circa Theatre next to the Te Papa Museum is this small 2 stage theater. When I was at Armageddon, William Kircher (Bifur) announced that he would be performing for a month as Sherlock Holmes and with the flyer he handed out we were able to get a discount on tickets. Good reason to go? Maybe not, but I was a bit excited to finally be able to go to the theater again. The fact that he was playing Sherlock Holmes in Sherlock Holmes and the Hound of the Baskervilles and I’d actually met him the month before just made it even better… and wow did they surprise!! I was a little worried in the beginning with 4 Watsons, but they certainly pulled it off. It’s very well done and you should go see a showing if you’re in Wellington any time soon. Friday and Saturday nights are around 8pm with a 4pm showing on Sunday. I’ll definitely be going back to Circa when I get a chance 🙂

Hit the cafe before the show.

or at least I think she has. I think my mom may be having “Empty Nest Syndrome” about 8years too late. My mom went and got a puppy. Meet Bailey Rae Greer. Australian Shepherd/Red Heeler mix. Now my mom will periodically send me pictures and videos all the while knowing I’ll NEVER get to hold her while she’s a puppy or probably even before her second birthday. Bailey came home at 5 weeks and has proceeded to break hearts since. Also, she seems to have claimed my Texas A&M fleece blanket as her own. 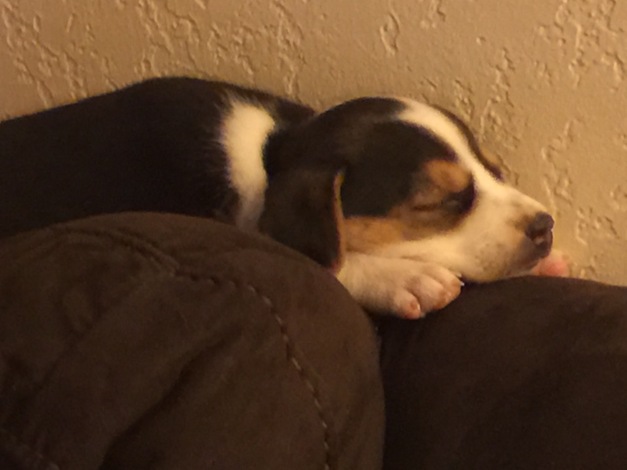 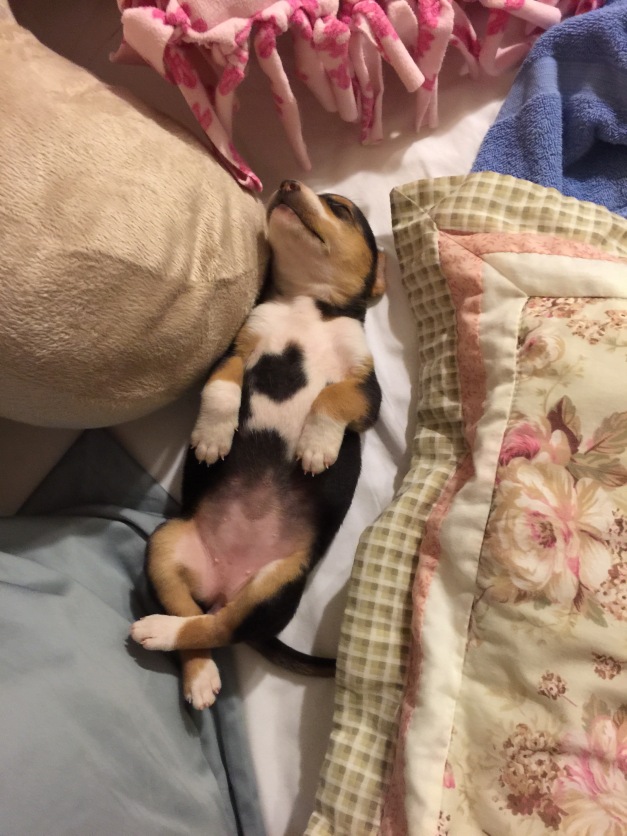 So I finally decided to release my inner fangirl and go to a comic con. First comic con – Wellington Armageddon Expo at Westpac Stadium. Holy crap did I have the time of my life!! I met some amazing people, not just celebrities. New friends were made and I had an amazing experience. Plus, I spent a ton of money on stuff, but totally worth it 😀

I was a bit crazy and got up around 6am and was on the road by 6:30am Saturday. I’m quite proud of myself because I didn’t get lost the whole way and only had trouble when I couldn’t get over into the far left lane to turn into Hataitai Village in Wellington. Not bad for a 3hr drive down there. I parked the car at Cath’s house (Chris’ sister – host dad) and she gave me and her daughter Amelia a ride to the stadium. So glad I got there super early because they cut off entrance due to too many people. Luckily, I didn’t have to stand in the rain, just got squished inside with the massive amount of people who showed up. Check my twitter, I have a pic posted over the crowd that shows the traffic jam.

Immediately after arriving and purchasing my two-day ticket, I sat down for the Sebastian Roché panel which was hilarious, of course. He got a lot of talk from The Originals and from Supernatural. Even got a video of him saying that he DOES ship “Destiel”. If you don’t know what that is, don’t look it up, lol. We did a round of Frere Jacques just because he spent 10 minutes talking about French.

Then proceeded to wander and see what I could spend my hard-earned money on that I probably didn’t need, but REALLY REALLY wanted 😀 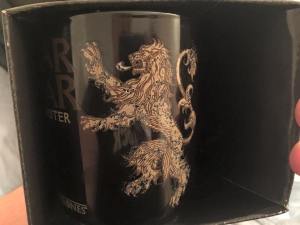 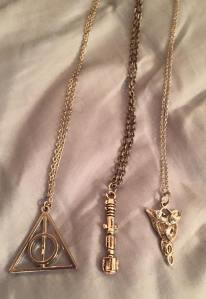 If you ever have a chance to see Cosplayers, get as many pics as possible because some of them are pretty amazing 😀 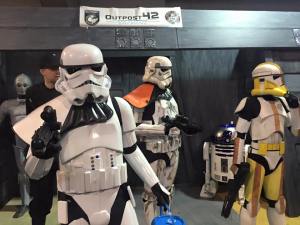 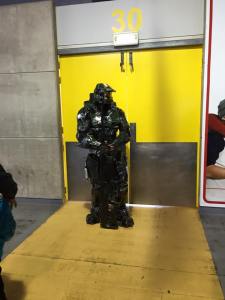 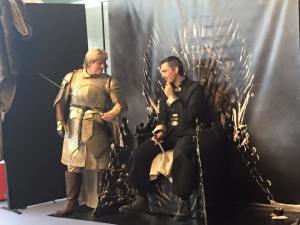 I had to go back to Cath’s around 4:30-ish to rest up for that night. I signed up for a pub crawl called “Battle of the Five Craft Beers” which consisted of 10 beers in 5 pubs with 5 celebrities. This is where I made some awesome new friends. The celebs on the crawl were Corin Nemec, Rick Mora, Rob Maschio, Jed Brophy, and William Kircher. Jed, William, and Rick were gone by pub 3. Rob made it to pub 4. Corin actually made it to the final pub and was buying drinks all around. We even stayed welllll after the event ended. Unfortunately, these were the only pics I remembered to take on the pub crawl, but you can see the new friends I made and the awesome time we were having 😛 😉 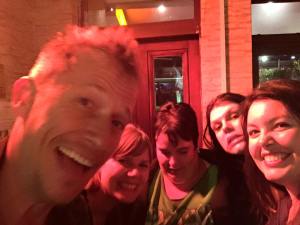 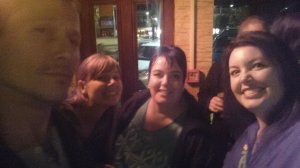 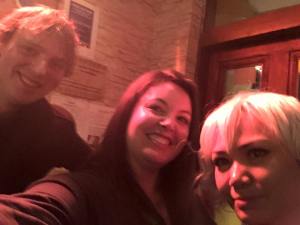 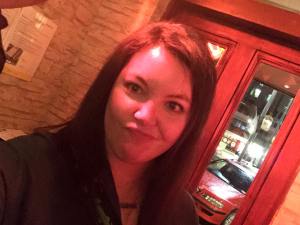 Sunday was when the other 3 panels I wanted to see were on. Jed and William had theirs on at the same time as Jim Beaver’s so I had a bit of a dilemma. I decided to attend the smaller panel for The Hobbit and then when it was done, I sat in on Jim’s. Definitely the way to do go about it. William actually remembered me from the tour, and the autograph signing and the picture session the day before. Asked me if I had a late night on the pub crawl, lol. 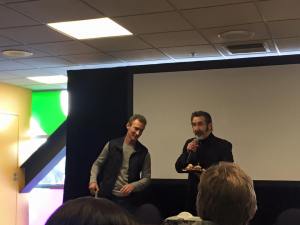 Jim’s panel may be a bit hard to hear, sorry, but it was on the main stage and it echoed quite a lot through the hall.

Karen’s panel was pretty great too. They surprised her with a Centurion Guard to escort her to the stage. The look on her face was priceless. 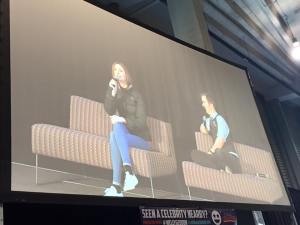 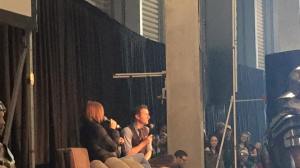 I have to say the BEST part of the weekend had to be the photo and signing sessions because I got a big bear hug from Jim Beaver and a got to spend 20 minutes talking to both Jed Brophy and William Kircher. I FaceTimed with my friend Sara back in Georgia… she actually screamed and and scared some of the people surrounding us. Jed let us know a fun fact – all the members of The Hobbit company have a standing invitation to visit Lee Pace’s parents in Texas. 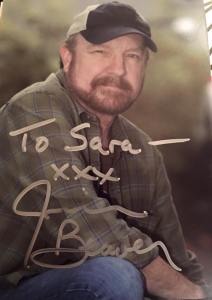 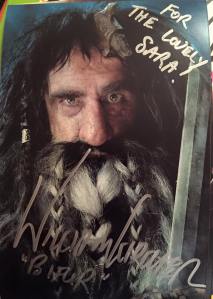 – 8:30am pick up time on Bunny St (or at least that’s the one I chose because it was right outside my hostel)
– Craig was pretty awesome to chat with on the way to grab the other members of our tour. He was waiting at the stop when I arrived. The van we were to have that day was named “Thorin” for obvious reason 😀 I was pretty happy about that. Meant a great start to the day, lol 🙂

– Off to pick up the rest of the group.
– Stop #1: Mount Victoria Lookout Point
We spoke about the harbor, landscape. You can see a bit of the hillside where filming was done.
Craig mentioned that sometimes during filming you could see little people running around 🙂 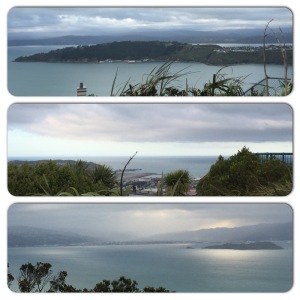 – Stop #2: Off to the forest (only evidence is a sign)
‘Shortcut to Mushrooms’ (fun fact – stunt double broke his collar bone doing the roll)

“I think we should get off the road.”

– Bit of a drive around Wellington to the other side near the Wellywood sign and the studio. You can see the green screen for filming. The buildings beside them are used for CGI, editing, etc.

If you get a ticket for the tour, you get a short 25min video on the creation of WETA (no photog).
This place is has a great mini-museum, but is horrendous on the wallet!! I wanted to buy so much stuff!! 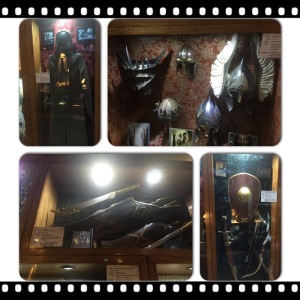 Ok, so I DID end up buying something 😀
I bought myself Kili’s ruin stone (and one for a friend) and some dwarven coins.

The tour around the actual workshop was pretty amazing. We got to meet some of the people that have worked on various Peter Jackson/WETA projects. Highly worth the ticket!! No photog allowed of course. The first thing was the full process of how a gun from District 9 was made. Both positive and negative molding. How skulls were made. Armour (Sauron’s suit weighed 30kg). Saw the Warthog built for HALO (which will sadly never be made). The workshop also helped with the Gallipoli exhibit from earlier. 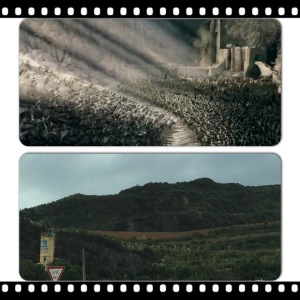 – Stop #6: Technically 4 rivers were used for the River Anduin, but this is one of them.

– Stop #7: Gandalf rides for Isengard (Harcourt Park)
Trees were bought from farmers down the road and put on hinges to be able to look like they were being ripped from the ground. 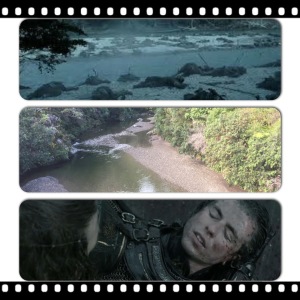 – And finally back to the hotel 😀 I highly recommend this tour because it’s absolutely amazing. If you’re a casual fan, do the half day. If you’re a big fan like me, then definitely the full day!!